New Jersey Jewish Standard's Larry Yudelson reports on the 2017 Jewish Orthodox Feminist Alliance (JOFA) conference, including a Hadar faculty members' presence on a panel debating the value of the
"Orthodox" label. Read the full text below or here: http://jewishstandard.timesofisrael.com/stronger-together/

Attendees at last week’s JOFA — that’s the Jewish Orthodox Feminist Alliance — couldn’t escape the fact that there were very many of them. There were far more of them than anyone had expected.

The evidence was in the people sitting on the floor and standing against the walls and spilling into hallways in session after session. The organization had planned for 1,000 people, as there had been in earlier conferences, which are held every three years. Instead, 1,200 showed up.

But it was hard to escape the impression that this year what drew people to the Columbia campus last Saturday night and Sunday was the chance to be part of a community. This community included men as well as women, lots of high school students and twentysomethings, as well as many representatives of the generation that launched Jewish feminism in the 1970s, or JOFA 20 years ago.

As a community, JOFA was less dependent than ever on finding established male Orthodox rabbis to approve and validate its agenda. Yeshivat Maharat, founded by Rabbi Avi Weiss, ordained its first class of women in 2013. At the conference plenary, woman who were ordained or studying for Orthodox ordination were asked to stand up. About 20 did. They were the speakers and teachers who filled the conference schedule. They were the community’s leaders.

“We had frank conversations addressing the growing wants and needs in our community, including LGBT inclusion,” Dr. Sharon Weiss-Greenberg, JOFA’s executive director, said. There were sessions on mental health, on mikvah, on single motherhood, on agunot, on whether Jewish texts argued for equality or equity. The schedule was as packed as the classrooms.

Some of the sessions that appealed to the younger generation made some of the older generation uncomfortable. A large turnout, “most in their 20s and younger,” came for a program that had originally taken place at Stern College: “Monologues of the Makom.” Makom is Hebrew for place, and is the rabbinic euphemism for female genitalia; this was “a frum Orthodox version of the Vagina Monologues,” Dr. Weiss-Greenberg said.

“People shared their stories,” she said. “They were promised confidentiality. There were no men, and no press. It was a very open forum to be very honest about issues related to their periods, their bodies, pregnancies, what have you in the Orthodox lens that deeply affects our relationship with our bodies.”

The community that was included at JOFA sessions extended beyond the open Orthodox world centered around Rabbi Avi Weiss and his Yeshivat Maharat and Yeshivat Chovevei Torah, open Orthodoxy’s rabbinical school for men. There were sessions featuring charedi feminists, such as the founders of the first women’s charedi political party in Israel. And there was an open discussion of whether denominational labels like “Orthodox” even mattered.

“There’s a trend in the up-and-coming generation to be less bound by labels,” Dr. Weiss-Greenberg explained. “Most denominations have seen this trend. In the Orthodox world, people were threatening to take away the Orthodox label for not fitting in the box.

“We see ourselves as part of the big tent of Orthodoxy, but appreciate that there are some who see themselves as tied to the Orthodox community but less tied to the label.”

In the session on the topic, Dena Weiss, who leads the beit midrash at Machon Hadar, the egalitarian non-denominational yeshiva in Manhattan, talked about flipping her synagogue roles and identities from the weekday, where she is a leader in the Machon Hadar community, to Shabbat, “where for the most part I daven in Orthodox shuls.

“I have a deep split in how I am in those spaces.

“In Hadar, I sit in the front. If someone has a question, they ask me. On Shabbos, I’m behind the mechitza, and no one would dare ask me a question, let alone offer me an aliyah,” she said.

She said she has “developed some sort of reputation of being post-denominational or not Orthodox. The real choice was do I do what I think is right from a perspective of avodat Hashem” — serving God — “or am I going to capitulate to some arbitrary standard of what’s considered to be Orthodox. It just seems like a really bizarre question, to choose to be Orthodox over avodat Hashem as I see it. Orthodoxy is very helpful as a description, it’s not very helpful as a prescriptive. As a description it’s much more helpful for institutions and much less helpful for individuals. People are much too complex to reduce them to a label. 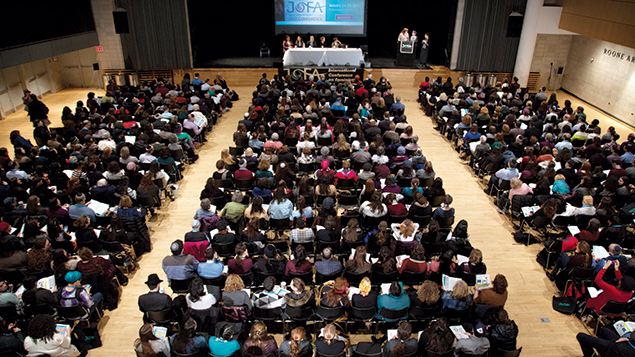 “I’ve experienced some small amount of discrimination for not being Orthodox enough. Every time someone says, ‘I wish we could have you as a scholar-in-residence but there’s someone in the community who thinks you’re not Orthodox enough’ I just feel sorry for them, for being willing to jettison Torah for some ideological standard,” she said.

Ms. Weiss said she grew up going to Orthodox camps and schools. But after eighth grade, her father, Cantor Sam Weiss, took a job at the Jewish Community Center of Paramus, a Conservative congregation.

“In the ninth grade I had a very strong identity as an Orthodox person,” she said. “I had to ask myself, where am I going to shul? I had to balance the important value of honoring my parents and my identity.

“My parents didn’t put any pressure on me. I went to seek some advice from people at my Orthodox high school, and I got two answers. One was that you may not go into a Conservative shul no mater what. Well, maybe if you have to go the bathroom. The other answer was I could go but I shouldn’t daven.

So she went with her compromise: Three weeks Orthodox, one week Conservative.

That worked fine until 10th or 11th grade, when “the self-appointed Orthodox police came up to me and said, ‘I heard sometimes you daven in your father’s shul. You can’t call yourself Orthodox anymore.’

“I think he was expecting me to either defend that what I was doing was Orthodox, or say he’s right and I should totally jettison kibud av v’em to be Orthodox.

“He didn’t expect the third path. I looked at him and said, ‘Okay, I’m not Orthodox.’”

Now, “if someone asks if I’m Orthodox, I’ll say, I don’t know. It depends on who you ask. The question is why are you asking? What’s the question behind the question? Tell me what you’re asking and I’ll be able to answer.”

Rabbi Ethan Tucker, whose father, Gordon Tucker, is a influential Conservative rabbi, was one of the founders of Machon Hadar. He resists denominational labels.

“I wonder whether the category of Orthodox offers us a group that’s hard to stay a part of,” he said. “In a world in which it is very easy to dissolve into your own completely autonomous self, you can say this group has tough requirements and I made it. I’m not always sure it’s so healthy for the religious environment that creates, but it’s undoubtedly part of the allure.

“If you say you’re Orthodox because of the community, I would say, a community for what, around what? If you’re looking for a community that will ask the same sort of questions you do, Facebook is fairly sufficient. If all you wanted was a place where women could receive an aliyah at a Shabbat morning davening, that’s been done for many decades now in many synagogues in the U.S. The reason this room, this JOFA conference exists is many people are looking for that plus peer reinforcement around Shabbat observance. If you look at what you want community for, the only question is will you build something on the ground that does it?”

Dr. Yehuda Kurtzer, head of the North American office of the Shalom Hartman Institute, was raised Orthodox. “It has taken me a long time to get to the place to ask why is it still a value to be thought of as serious by Orthodox Jews even if I’m not Orthodox,” he said.

“Orthodoxy is resisting the criticism that comes from outside. You have to be within the club to be an effective critic. It’s a bigotry of low expectations. It’s hard for those who are policing the boundary to engage the criticism of people who are not inside it. I want to challenge the Orthodox community as to why it holds the line around Orthodox identity. What would it need to do to take the moral, political, and social criticism that’s coming its way? Does the label speak to the complex identities of the people who want to be part of the label, or is it becoming coercive and painful? I have had to endure the pain of leaving behind the safety and comfort of the label that meant something for me for a long time,” he said.

But Rabbi Shmuel Hain of Young Israel Ohab Zedek of North Riverdale argued for sticking with the Orthodox label.